The three empires that have successively ruled in this area have left numerous monuments that form the priceless heritage Istanbul proudly treasures and offers to the visitors. Some of the most important that must be seen are:

The Roman Hippodrome: The Roman Hippodrome stands near the Blue Mosque and Hagia Sophia at Sultan Ahmet Square. The scene of chariot races and the center of Roman and Byzantine civic life, the hippodrome houses the Obelisk of Theodosius, the Column of Constantine and the Bronze Serpentine column.

The Istanbul land walls (city walls): Built in the 5th century by the Emperor Theodosius II, the walls stretch 7 km. from Topkapi Gate on the Sea of Marmara along the seashore to the Golden Horn and 5 km from the Golden Horn, overland to Topkapi Palace. With many towers and bastions, they were once the mightiest fortifications in Christendom. UNESCO has declared the land walls, and the area which they enclose, one of the cultural heritages of the world.

The Aqueduct of Valens: Built by the Emperor Valens in 368 AD, the aqueduct supplied the Byzantine and later the Ottoman Palaces with water. About 900 meters of the double tier arches remain.

This ancient basilica, now a museum, built by Constantine the Great and reconstructed by Justinian in the 6th century, is one of the architectural marvels of all times Its immense dome rises 55 meters above the ground and is 31 meters in diameter. The beautiful interior decorations include fine Byzantine mosaics.

St. Irene Museum: St. Irene was the first church in Istanbul and was built by Constantine in the 4th century and rebuilt by Justinian. It is reputedly the site of a pre- Christian temple. 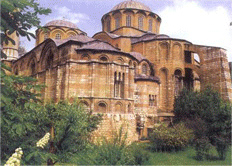 The 11th century church of St. Saviour in Chora is, after Hagia Sophia, the most important Byzantine Museum in Istanbul. The walls are decorated with superb 14th century frescoes and mosaics on a gold background. This church influenced the European Renaissance. 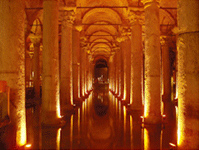 Close to Hagia Sophia is the 6th century Byzantine cistern known as the Yerebatan Sarayi or the Underground Palace. Fine brick vaulting is supported by 336 Corinthian columns. 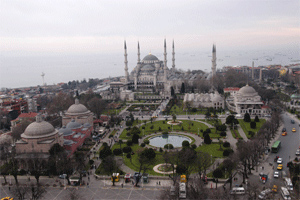 Facing Hagia Sophia, is the supremely elegant, imperial six minareted mosque of Sultan Ahmet I. Built between 1609-1616 by the architect Mehmet, it is known as the Blue Mosque because of its magnificent interior decorations of hand made blue Iznik tiles. 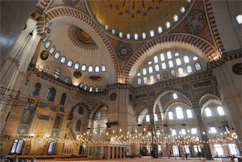 The mosque of Suleyman the Magnificent, where he and his wife are buried, is considered as the most beautiful of all imperial mosques in Istanbul. It was built between 1550 and 1557 by the famous architect Sinan whose wish was to surpass the builders of Hagia Sophia. Standing on a hill, it is conspicuous by its great size, emphasized by the 4 minarets rising one from each corner of the courtyard. Inside, the mihrab (prayer niche) and the mimber (pulpit) are of finely carved white marble and there are fine stained glass windows. Adjoining the mosque were theological schools, a school of medicine, a soup kitchen and hospice for the poor, a caravanserai and a Turkish bath.

Rustem Pacha Mosque: Another skillful accomplishment of the great architect Sinan, this mosque was built in 1551 on the orders of Rustem Pacha, Grand Vizier and son-in-law of Suleyman the Magnificent. The exquisite interior is covered with some of the finest examples of Iznik tiles.

Sehzadebaşı Mosque: Sultan Suleyman the Magnificent ordered Architect Sinan to construct the mosque in memory of his son who died in 1543. The construction of the mosque and the complex was completed in four years. It is located at Sarachane across the Istanbul Municipality Palace.

Fatih Mosque: This imperial mosque, constructed between 1463 and 1470 bears the name of the conqueror of İstanbul, Fatih Sultan Mehmet and the site of his mausoleum. Standing on top of one of the hills of Istanbul, it is notable for its vast size and great complex of religious buildings surrounding it : theological schools, hospices, a hospital, baths, a caravanserai and a library.

Overlooking the Bosphorus and the Golden Horn stands in a maze of buildings that was the great palace of the Ottoman sultans from the 15th to the 19th centuries. The first courtyard is a magnificent wooded garden. On the right of the second court, shaded by cypress and plane trees is the palace kitchen, now housing an exquisite collection of crystal, silver and Chinese porcelain, while on the left is the Harem, the secluded quarters of the wives and concubines of the sultan. The third court contains the Hall of Audience of the Sultan, the library of Sultan Ahmet III an exhibition of robes worn by the sultans and their families, the famous jewels of the Imperial Treasury and an exhibition of miniatures. In the center of the third court is the Pavilion of the Holy Mantle enshrining relics of the Prophet Mohammed.

Built in the mid 19th century by Sultan Abdulmecit II, Dolmabahce Palace has an impressive 600 meters frontage on the Bosphorus. The most important section is the vast reception saloon, with 56 columns and a huge crystal chandelier weighing 4 ½ tons and lit by 750 lights.

On the Asian side of the Bosphorus, the Beylerbeyi Palace was built by Sultan Abdulaziz in the 19th century of white marble. It possesses a beautiful garden with magnolia trees. It was used as a summer residence of the sultans and a guest house for visiting foreign dignitaries.

The Rumeli Fortress, built by Fatih Sultan Mehmet in 1452 prior to the conquest of Istanbul, was completed in only four months. One of the most beautiful works of military architecture anywhere in the world, it is now used as the setting for some of the events of the Istanbul Festival.